Which dating show can make you the most famous?

Whether dating shows are your proud obsession or guilty pleasure, you’ll likely know at least some of their stars.

With Love Island’s eighth series in full swing and Netflix frequently adding new shows like The Ultimatum to our screens, we love watching people find love more than ever! Whilst these shows provide us with heated arguments, iconic quotes and saucy scandals, they also create a wave of new celebs and influencers with every series.

But with so many different shows airing throughout the year around the world, which dating shows can give their contestants a ‘successful’ career?

To find out, we’ve analysed the total followers, average likes, estimated earnings and search volumes of contestants from various shows to see which can make you the most famous. 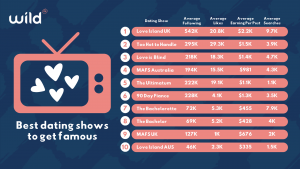 It may come as little surprise to any dating show fanatics that ITV’s Love Island takes the top spot for producing famous contestants. With the first series starting in 2015, viewing figures have increased yearly. The show’s interest in the states has also picked up in recent years, despite its own US spinoff, and was even referenced by Zendaya’s character in HBO’s Euphoria.

The show has many memorable contestants across its series. Most notably is series five’s blonde bombshell, Molly-Mae Hague. Despite not winning her series, she gained an Instagram following of 6.4 million followers and secured the role of Creative Director of fashion giant Pretty Little Things, with a rumoured seven-figure salary. Previous contestants such as Maura Higgins, Olivia Atwood and Zara McDermott have also secured numerous TV and Presenting work since leaving the famous villa.

Although the British series did take the overall top spot and ranked highest for average followers (542,826), earnings ($2,263), and online searches (9,742), data shows that Netflix’s Too Hot to Handle secured the first position for average likes (29,389). Contestants of the Netflix series also gain nearly 10,000 more likes per post than those from Love Island.

Whilst Too Hot to Handle ranked just below Love Island for followers and earnings, it ranks surprisingly low in the search volumes of the contestant’s names in only sixth position (3,913). Despite this low ranking, one particular anomaly from last season was Holly Scarfone, whose average monthly searches were just under 30,000. This steep rise could be due to recent dating rumours between herself and Scott Disick. 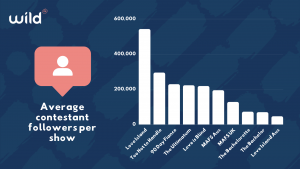 The average number of online searches for contestants’ names was also low for Netflix’s recent series, The Ultimatum. Despite ranking lowest in searches, the show had the third-highest average for likes (19,132 per post).

On the other hand, the US series The Bachelorette only ranked eighth for followers and estimated earnings. However, its contestants had the second-highest second volume for their names (7,993).

Married at First Sight produces series in both Australia and the UK. Whilst contestants of the Australian version exceed their UK equivalent by around 70,000 average followers. The most surprising difference was the average likes, with the Australian cast gaining around 15 times more likes per post.

With Married at First Sight Australia having an average of 4,314 monthly searches of names, two contestants exceeded this average significantly. The dramatic feud between Domenica Calarco and Olivia Frazier was a highlight for many fans of the latest series, with their heated arguments and nude leak scandals leading to many discussions across social media and news channels. 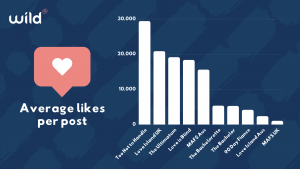 Brits do it best

Although Too Hot to Handle does include contestants from Britain, America, Australia, South Africa and more, Love Island was the only British show to make it into the top five and Married at First Sight UK ranked only in the ninth position. Out of the top ten, all five of the US-based shows ranked in the top eight.

The more, the merrier!

Surprisingly, shows with more contestants in a series did seem to perform higher in followers and likes. For example, Love Island had 31 different contestants in its seventh series, and Love is Blind had 30. Whereas Married at First Sight UK had only eight couples and 90 Day Fiance had seven.

Does the winner take it all?

From this data, we can understand which shows are best to enter to become successful. However, do you actually need to win them to become famous?

Recent winners of both Love Island UK (Millie and Liam) and Australia (Mitch and Tina) have the highest number of followers out of their series. However, recent winners of Too Hot to Handle, Beaux and Harry, were only the third and fourth most followed from their series, with Georgia Hassarati and Holly Scarfone taking the top spots.

Similarly, on The Bachelor, despite being dumped by the bachelor himself last minute to couple up with Susie Evans, Gabby Windey remains the most followed contestant from her series, with more followers and nearly twice as many likes as the final couple. Showing that a last-minute rejection or coming second place may not be all bad.

If you’re looking for a Digital PR Agency to build visibility and expertise through SEO-driven PR campaigns, get in touch with the Wild PR team today.