New research by specialist hair and skin clinic, Aventus Clinic, reveals the dirtiest items in a makeup bag and highlights how much bacteria is lurking on our most-used makeup brushes.

With more people than ever taking an interest in makeup due to platforms such as TikTok showcasing new trends and hacks, it’s essential that makeup users are aware of the bacteria that could be harbouring on their most loved brushes if they aren’t cleaned regularly and correctly.

Aventus Clinic, which specialises in skin rejuvenation treatments, swabbed¹ the most common makeup brushes found in a makeup bag to test for aerobic bacteria, yeast and mould. The swabs were then incubated and tested to find the number of colony-forming units per cm2, revealing the worst makeup brushes for high levels of viable bacteria and fungal cells.

The dirtiest makeup brushes revealed by the study were:

The research found that the eyeshadow brush is the worst offending item in a makeup bag, ranking the highest of all the tested areas for yeast colonies per agar² – a staggering 600. The level of mould identified on the eyeshadow brush (60) also outranked all other brushes tested. Experts from Aventus Clinic warn that unclean brushes such as this that come into contact with the eye could increase the chances of contracting an eye infection, which could cause swelling of the eyelid, discharge, inflammation of the white of the eye, and itchiness. 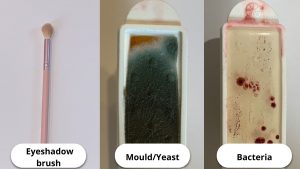 The blusher brush was the second dirtiest brush found in the makeup bag due to high levels of bacteria colonies per agar³ (500) and harbouring a high infection level (100). Due to having direct contact with the main parts of the face, a bacteria-infested blusher brush could clog pores and lead to an acne breakout. It could also cause a breakdown of collagen, subsequently leading to premature ageing warn experts from Aventus Clinic. 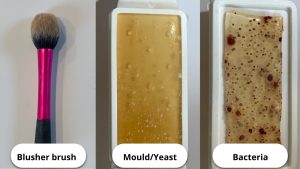 Used on almost every night out and known to be passed around from friend to friend, the lip gloss container and applicator was the third dirtiest item found in a makeup bag. A staggering 400 colonies of bacteria were present on the swab sample of the lip gloss, alongside high levels of infection (100) and mould (50). 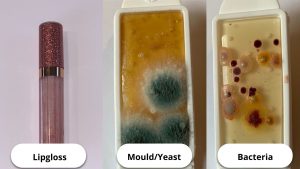 Another tool with direct contact with the eye is the eyelash curler, which ranks fourth on the list for having the most colony-forming units, including a whopping 540 colonies of bacteria and a level of infection of 60. The beauty blender ranks fifth as the dirtiest makeup applicator following this. The worst-forming colony units formed on the beauty blender include the colonies of yeast (85) and the colonies of bacteria (35). 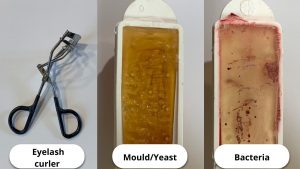 Surprisingly, the foundation brush, arguably the most used out of every brush found in a makeup bag, produced the lowest amount of combined colony-forming units, with 85.5 in total. That’s a staggering 91% less bacteria, yeast and mould than found on the eyeshadow brush and 88% less than the blusher brush. 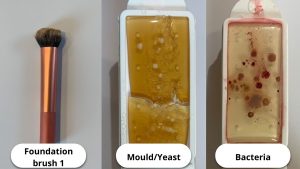 Even more surprising is that a toilet seat harbours an even lower amount of combined colony-forming units (3) than all 11 makeup brushes swabbed by Aventus Clinic. Overall, across the 12 brushes tested, the swabs found a total of 4,364 colonies of yeast and bacteria.

Dr Suhail Alam, medical director at Aventus Clinic, comments on the study: “It’s awful to see the amount of bacteria that could potentially sit on a makeup brush. However, it’s not entirely shocking. Even after a person uses a makeup brush for the first time, it will already be forming colonies of bacteria.

“With daily use, the brushes will automatically start collecting dirt, pollutants, oil and dead skin cells, which is why makeup brushes act as a breeding ground for bacteria which can lead to breakouts and skin irritations. If a contaminated brush comes into contact with the eye, this could cause infections or allergic reactions but these can be avoided with a weekly cleaning routine.

“We recommend cleaning your makeup brushes at least once a week to avoid such an enormous build-up of bacteria. To clean the brushes properly, we suggest lathering the brush in an appropriate skin cleanser, massaging any bristles in the palm of your hand thoroughly, rinsing with lukewarm water and then squeezing the brush to remove any excess moisture. The more you clean your brushes, the less dirt seeps out of the bristles, but this is a good thing, so don’t stop cleaning your brushes regularly if you find this to be the case!”

To find out more about the study and the worst offending makeup brushes, please visit: https://aventusclinic.com/dirtiest-brushes-in-your-makeup-bag/